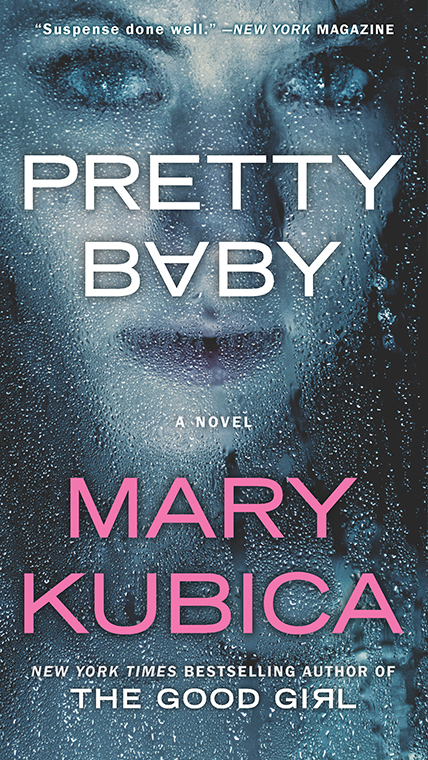 The first time I see her, she is standing at the Fullerton Station, on the train platform, clutching an infant in her arms. She braces herself and the baby as the purple line express soars past and out to Linden. It’s the 8th of April, forty-eight degrees and raining. The rain lurches down from the sky, here, there and everywhere, the wind untamed and angry. A bad day for hair.

The girl is dressed in a pair of jeans, torn at the knee. Her coat is thin and nylon, an army green. She has no hood, no umbrella. She tucks her chin into the coat and stares straight ahead while the rain saturates her. Those around her cower beneath umbrellas, no one offering to share. The baby is quiet, stuffed inside the mother’s coat like a joey in a kangaroo pouch. Tufts of slimy pink fleece sneak out from the coat and I convince myself that the baby, sound asleep in what feels to me like utter bedlam—chilled to the bone, the thunderous sound of the “L” soaring past—is a girl.

There’s a suitcase beside her feet, vintage leather, brown and worn, beside a pair of lace-up boots, soaked thoroughly through.

She can’t be older than sixteen.

She’s thin. Malnourished, I tell myself, but maybe she’s just thin. Her clothes droop. Her jeans are baggy, her coat too big.

A CTA announcement signals a train approaching, and the brown line pulls into the station. A cluster of morning rush hour commuters crowd into the warmer, drier train, but the girl does not move. I hesitate for a moment—feeling the need to do something—but then board the train like the other do-nothings and, slinking into a seat, watch out the window as the doors close and we slide away, leaving the girl and her baby in the rain.

But she stays with me all day.

I ride the train into the Loop, to the Adams/Wabash Station, and inch my way out, down the steps and onto the waterlogged street below, into the acrid sewage smell that hovers at the corners of the city streets, where the pigeons amble along in staggering circles, beside garbage bins and homeless men and millions of city dwellers rushing from point A to point B in the rain.

I spend whole chunks of time—between meetings on adult literacy and GED preparation and tutoring a man from Mumbai in ESL—imagining the girl and child wasting the better part of the day on the train’s platform, watching the “L” come and go. I invent stories in my mind. The baby is colicky and only sleeps in f lux. The vibration of approaching trains is the key to keeping the baby asleep. The woman’s umbrella—I picture it, bright red with f lamboyant golden daisies—was manhandled by a great gust of wind, turned inside out, as they tend to do, on days like this. It broke. The umbrella, the baby, the suitcase: it was more than her two arms could carry. Of course she couldn’t leave the baby behind. And the suitcase? What was inside that suitcase that was of more importance than an umbrella on a day like this? Maybe she stood there all day, waiting. Maybe she was waiting for an arrival rather than a departure.

Or maybe she hopped on the red line seconds after the brown line disappeared from view.

When I come home that night, she’s gone. I don’t tell Chris about this because I know what he would say: who cares?

I help Zoe with her math homework at the kitchen table. Zoe says that she hates math. This comes as no surprise to me. These days Zoe hates most everything. She’s twelve. I can’t be certain, but I remember my “I hate everything” days coming much later than that: sixteen or seventeen. But these days everything comes sooner. I went to kindergarten to play, to learn my ABCs; Zoe went to kindergarten to learn to read, to become more technologically savvy than me. Boys and girls are entering puberty sooner, up to two years sooner in some cases, than my own generation. Ten-year-olds have cell phones; seven- and eight-year-old girls have breasts.

Chris eats dinner and then disappears to the office, as he always does, to pour over sleepy, coma-inducing spreadsheets until after Zoe and I have gone to bed.

The next day she’s there again. The girl. And again it’s raining. Only the second week of April, and already the meteorologists are predicting record rainfall for the month. The wettest April on record, they say. The day before, O’Hare reported 0.6 inches of rain for a single day. It’s begun to creep into basements, collect in the pleats of low-lying city streets. Airport flights have been cancelled and delayed. I remind myself, April showers bring May flowers, tuck myself into a creamy waterproof parka and sink my feet into a pair of rubber boots for the trek to work.

She wears the same torn jeans, the same army-green jacket, the same lace-up boots. The vintage suitcase rests beside her feet. She shivers in the raw air, the baby writhing and upset. She bounces the baby up and down, up and down, and I read her lips—shh. I hear women beside me, drinking their piping hot coffee beneath oversize golf umbrellas: she shouldn’t have that baby outside. On a day like today? they sneer. What’s wrong with that girl? Where is the baby’s hat?

The purple line express soars past; the brown line rolls in and stops and the do-nothings file their way in like the moving products of an assembly line.

I linger, again, wanting to do something, but not wanting to seem intrusive or offensive. There’s a fine line between helpful and disrespectful, one which I don’t want to cross. There could be a million reasons why she’s standing with the suitcase, holding the baby in the rain, a million reasons other than the one nagging thought that dawdles at the back of my brain: she’s homeless.

I work with people who are often poverty stricken, mostly immigrants. Literacy statistics in Chicago are bleak. About a third of adults have a low level of literacy, which means they can’t fill out job applications; they can’t read directions or know which stop along the “L” track is theirs. They can’t help their children with their homework.

The faces of poverty are grim: elderly women curled into balls on benches in the city’s parks, their life’s worth pushed around in a shopping cart as they scavenge the garbage for food; men pressed against high-rise buildings on the coldest of January days, sound asleep, a cardboard sign leaned against their inert body: Please Help. Hungry. God Bless. The victims of poverty live in substandard housing, in dangerous neighborhoods; their food supply is inadequate at best; they often go hungry. They have little or no access to health care, to proper immunization; their children go to underfunded schools, develop behavioral problems, witness violence. They have a greater risk of engaging in sexual activity, among other things, at a young age and thus, the cycle repeats itself. Teenage girls give birth to infants with low birth weights, they have little access to health care, they cannot be properly immunized, the children get sick. They go hungry.

Poverty, in Chicago, is highest among blacks and Hispanics, but that doesn’t negate the fact that a white girl can be poor.

But then, to my surprise, the girl boards the train. She slips through the doors seconds before the automated announcement—bing, bong, doors closing—and I follow along, wondering where it is that we’re going, the girl, her baby and me.

The car is crowded. A man rises from his seat, which he graciously offers to the girl; without a word, she accepts, scooting into the metal pew beside a wheeler-dealer in a long black coat, a man who looks at the baby as if it might just be from Mars. Passengers lose themselves in the morning commute—they’re on their cell phones, on their laptops and other technological gadgets, they’re reading novels, the newspaper, the morning’s briefing; they sip their coffee and stare out the window at the city skyline, lost in the gloomy day. The girl carefully removes the baby from her kangaroo pouch. She unfolds the pink f leece blanket, and miraculously, beneath that blanket, the baby appears dry. The train lurches toward the Armitage station, soaring behind brick buildings and three and four f lats, so close to people’s homes I imagine the way they shake as the “L” passes by, glasses rattling in cabinets, TVs silenced by the reverberation of the train, every few minutes of the live long day and long into the night. We leave Lincoln Park, and head into Old Town, and somewhere along the way the baby settles down, her wailing reduced to a quiet whimper to the obvious relief of those on the train.

I’m forced to stand farther away from the girl than I’d like to be. Bracing myself for the unpredictability of the train’s movements, I peer past bodies and briefcases for the occasional glimpse—flawless ivory skin, patchy red from crying—the mother’s hollow cheeks—a white Onesies jumpsuit—the desperate, hungry suction on a pacifier—vacant eyes. A woman walks by and says, “Cute baby.” The girl forces a smile.

Smiling does not come naturally to the girl. I imagine her beside Zoe and know that she is older: the hopelessness in her eyes, for one, the lack of Zoe’s raw vulnerability, another. And of course, there is the baby (I have myself convinced that Zoe still believes babies are delivered by storks), though beside the businessman the girl is diminutive, like a child. Her hair is disproportional: cut blunt on one side, shoulder length the other. It’s drab, like an old sepia photograph, yellowing with time. There are streaks of red, not her natural hue. She wears dark, heavy eye makeup, smeared from the rain, hidden behind a screen of long, protective bangs.

The train slows its way into the Loop, careening around twists and turns. I watch as the baby is swaddled once again in the pink f leece and stuffed into the nylon coat and prepare myself for their departure. She gets off before I do, at State/Van Buren, and I watch through the window, trying not to lose her in the heavy congestion that fills the city streets at this time of day.

But I do anyway, and just like that, she’s gone.