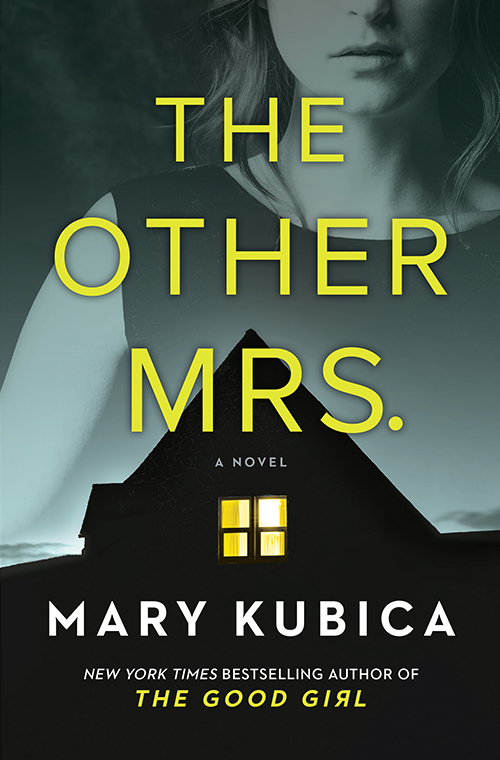 There’s something off about the house. Something that nags at me, makes me feel uneasy, though I don’t know what it is about the house that makes me feel this way. On the surface, it’s perfectly idyllic, gray with a large covered porch, one that runs the full width of the house. It’s boxy and big, a foursquare farmhouse with windows aligned in rows, symmetrical in a way I find eye-pleasing. The street itself is charming, sloped and tree-covered, each house as lovely and well-kept as the next.

On the surface, there’s nothing about the house that’s not to like. But I know better than to take things at face value. It doesn’t help that the day, like the house, is gray. If the sun were out maybe I’d feel differently.

“That one,” I say to Will, pointing at it because it’s identical to the one in the picture that was given to Will from the executor of the estate. He’d flown in last week, to Portland, to take care of the official paperwork. Then he’d flown back, so we could drive here together. He hadn’t had time to see the house then.
Will pauses, bringing the car to rest in the street. He and I lean forward in our seats at exactly the same time, taking it in,

as do the boys in the back seat. No one speaks, not at first, not until Tate blurts out that the house is gigantic—transposing his soft and his hard g’s as seven-year-olds have a tendency to do—and Will laughs, overjoyed that someone besides him can see the advantage of our move to Maine.

The house is not gigantic, not really, but in comparison to a 1,200-square-foot condo, it is, especially when it comes with its own yard. Tate has never had his own yard before.

Will gently steps on the gas, easing the car into the driveway. Once in Park, we climb out—some more quickly than others, though the dogs are the quickest of all—stretching our legs, grateful, if for nothing else, to be done with the long drive. The air outside is different than what I’m used to, infused with the scent of damp earth, salty ocean, and the woodsy terrain. It smells nothing like home. The street is quiet in a way I didn’t like. An eerie quiet, an unsettling quiet, and at once I’m reminded of the notion that there’s safety in numbers. That bad things are less likely to happen among crowds. There’s a misconception that rural living is better, safer than urban living, and yet it’s simply not true. Not when you take into account the disproportionate number of people living in cities, the inadequate healthcare system in rural parts.

I watch Will walk toward the porch steps, the dogs running along beside him, passing him up. He’s not reluctant like me. He struts as much as he walks, anxious to get inside and check things out. I feel resentful because of it, because I didn’t want to come.

At the base of the steps he hesitates, aware only then that I’m not coming. He turns toward me, standing still next to the car, and asks, “Everything alright?” I don’t answer because I’m not sure if everything is alright.

Tate goes dashing after Will, but fourteen-year-old Otto hovers like me, also reluctant. We’ve always been so much alike.

“Sadie,” Will says, modifying his question, asking this time, “Are you coming? It’s cold,” he says, a fact of which I was unaware because of my focus on other things, like how the trees around the house tower high enough to block the light. And how dangerously slick the steep street must be when it snows. A man stands up at the top of the hill, in his lawn with a rake in hand. He’s stopped raking and stands perched, watching me, I think. I raise a hand and wave, the neighborly thing to do. He doesn’t wave back. He turns away, goes back to raking. My gaze goes back to Will, who says nothing of the man. Surely he saw him as well as I did.

“Come on,” Will says instead. He turns and climbs the steps with Tate beside him. “Let’s go inside,” he decides. At the front door, Will reaches into his pocket and pulls out the house keys. He knocks first, but he doesn’t wait to be let in. As Will unlocks the door and pushes it open, Otto moves away from me, leaving me behind. I go too, only because I don’t want to be left alone outside.

Inside we discover that the house is old, with things like mahogany paneling, heavy drapery, tin ceilings, brown-and-forest-green walls. It smells musty. It’s dark, dreary.

We crowd together in the entryway and assess the home, a traditional floor plan with the closed-in rooms. The furnishings are formal and unwelcoming.
My attention gets lost on the curved legs of the dining room table. On the tarnished candelabra that sits on top of it. On the yellowing chair pads. I hardly see her standing at the top of the stairs. Were it not for the slightest bit of movement caught out of the corner of my eye, I might never have seen her. But there she stands, a morose figure dressed in black. Black jeans, a black shirt, bare feet. Her hair is black, long with bangs that slant sideways across her face. Her eyes are outlined in a thick slash of black eyeliner. Everything black, aside from the white lettering on her shirt, which reads, I want to die. The septum of her nose is pierced. Her skin, in contrast to everything else, is white, pallid, ghostlike. She’s thin.

Tate sees her too. At this, he moves from Will to me, hiding behind me, burrowing his face into my backside. It’s not like Tate to be scared. It’s not like me to be scared, and yet I’m well aware that the hairs on the nape of my neck now stand on end.

Will now sees her too. His eyes go to her, he says her name. He starts climbing the steps to her, and they creak under his feet, protesting our arrival. “Imogen,” he says with arms wide, expecting, I think, that she’ll fold herself into them and let him hold her. But she doesn’t because she’s sixteen and standing before her is a man she hardly knows. I can’t fault her for this. And yet the brooding, melancholic girl was not what I’d imagined when we discovered we were given guardianship of a child.

Her voice is acidic when she speaks, quiet—she doesn’t ever raise her voice, she doesn’t need to. The muted tone is much more unsettling than if she screamed. “Stay the fuck away from me,” she says coolly.

She glowers down over the stair banister. My hands involuntarily move behind me and to Tate’s ears. Will stops where he is. He lowers his arms. Will has seen her before, just last week when he came and met with the executor of the estate. It was then that he signed the papers and took physical possession of her, though arrangements had been made for her to stay with a friend while Will, the boys and I drove here.

The girl asks, her voice angry, “Why’d you have to come?”

Will tries to tell her—the answer is easy, for were it not for us, she’d likely have entered the foster care system until she turned eighteen, unless she was granted emancipation, which seemed unlikely at her age—but an answer is not what she wants. She turns away from him, disappearing into one of the second story rooms where we hear her futzing angrily with things. Will makes a move to follow, but I say to him, “Give her time,” and he does.

This girl is not the same as the little girl Will had shown us in the photograph. A happy-go-lucky freckled brunette of about six years old. This girl is different, much changed. The years have not been kind to her. She comes with the house, just another thing that’s been left to us in the will, mixed in with the house and the heirlooms, what assets remain in the bank. She’s sixteen, nearly able to be on her own—a moot point that I tried arguing, for certainly she had a friend or some other acquaintance who could take her in until she turned eighteen—but Will said no. With Alice dead, we were all that remained, her only family, though she and I were meeting just now for the first time. She needs to be with family, Will told me at the time, days ago only though it feels like weeks. A family who will love and care for her. She’s all alone, Sadie. My maternal instinct had kicked in then, thinking of this orphaned child all alone in the world, with no one but us.

I hadn’t wanted to come. I’d argued that she should come to us. But there was so much more to consider, and so we came anyway, despite my reservations.
I wonder now, and not for the first time this week, what kind of disastrous effect this change will have on our family. It can’t possibly be the fresh start Will so auspiciously believes it to be.